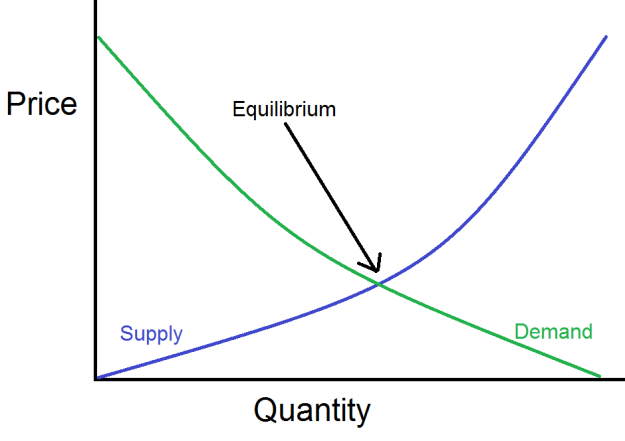 Using this idea, one would expect immigration to cause wages to fall. It seems obvious. Increasing the supply of labor will push the equilibrium price down. Won’t it?

Not so fast. At best, Supply and Demand is an approximation. If the market were frozen in time and all variables were somehow fixed except supply, then sure, a rising supply of workers would cause a falling price of labor. Maybe. I call this kind of thinking the most common economic error. Just how are we to freeze the economy the way a camera freezes a scene, and yet change that very economy by adding more workers?

There is no such thing as Economic Photoshop.

Static thinking is tempting because it’s easy and seems to appeal to common sense. To borrow a phrase coined by Wolfgang Pauli, it’s not even wrong.

As with every kind of aggregate quantity that economists like to measure, supply and demand are not forces that impel market participants. Hiring managers don’t input the quantity of workers into an equation, and get the wage from that. They’re concerned with something quite different, and much easier. They want to make a profit.

The supply-and-demander will at this point demand, “well if you add more workers competing for the same job, won’t the hiring manager be all too happy to pay less than $8?” That’s the same fallacy I described above. It presumes that we can hold constant the number of restaurants, burger-eating consumers, and even the percentage meals people eat out. We cannot presume that we can change only the number of workers.

Labor doesn’t work as the so called Law of Supply and Demand predicts. America once had by far the greatest immigration, and at the same time it had by far the fastest wage gains. To understand why, we have to look at what supply demand is trying to approximate.

Let me explain. The first unit of a good is bought by the consumer who places the highest value on it. For example, bakeries have long bought wheat to make bread. No higher use of wheat exists than eating it. We need food to live.

If farmers can produce even more and sell it to the market, who knows what the next lower use of wheat is? Maybe someone will make recyclable boxes out of it.

People say that the price has to fall to find a new equilibrium on the demand curve, but they do not see the cause, declining marginal utility. They see only the effect.

This brings us to human labor. Is work like wheat, descending from high uses to ever-lower uses?

The exact opposite is true. Before the Industrial Revolution, the vast majority of people worked as laborers in agriculture. The work was not only back-breaking, but offered very low value. Ever since then, developed economies have employed more and more people. But they are not employed in lower and lower jobs for them (question: what’s lower than mucking out a stall for a horse?) They are employed in higher and higher jobs. Work is so advanced today, we produce such high value products, that people from the 18th century could not have even imagined it.

The marginal utility of human work does not diminish, as the number of workers increases. As the size of a market grows, the value of firms and workers within it rises.

3 thoughts on “Look Beyond Supply and Demand to Understand Labor”