Interest rates have risen since May of this year, from under 1.7% to over 2.7%. By any measure, that is an enormous move.

I have mostly written about how falling interest rates cause capital destruction, because that is the environment we have been in since 1981. There are, however, occasional corrections when interest rates rise. Rising rates means bond prices fall (the relationship between interest rate and bond price is a rigid mathematical inverse, like a teeter totter).

Here is a picture from Zero Hedge worth 1000 words in explaining the consequences on this side of unstable rates. Banks are taking big (unrealized, so far) losses. 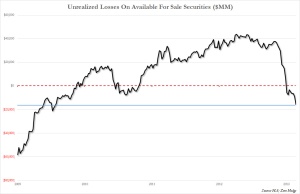 If you buy a bond, and then the interest rate rises, you suffer a capital loss. If you borrowed money to buy bonds with leverage, you could be in big trouble very quickly.

On the other side of the trade, some bond issuers are breathing a little easier as the burden of their debt has fallen. Unfortunately, most of them have a different problem. They generally must “roll” liabilities, which means selling new bonds to pay old bonds. They are forced to replace lower-interest borrowing with higher-interest borrowing. This is pinching their cash flow.

Whether the wrecking ball swings to one side of the street when rates fall, or to the other side when rates rise, destruction is the result either way. We need the monetary system that provides a stable interest rate.